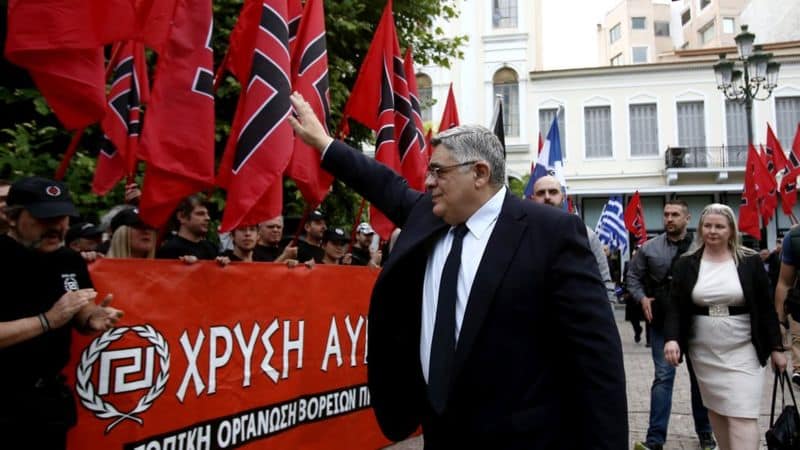 After a trial lasting more than five years, the leadership of Greece’s neo-Nazi party has been convicted of running a criminal organisation.
Big crowds gathered outside the court in Athens as the judges gave verdicts on 68 defendants.
Golden Dawn secured 18 MPs in 2012, as Greeks were battered by a financial crisis.
The criminal inquiry into the party began with the murder of an anti-fascist musician in 2013.
Leader Nikos Michaloliakos and six colleagues were convicted of heading a criminal group. Supporter Giorgos Roupakias was found guilty of murdering an anti-racist musician and 15 others were convicted of conspiracy in the case.
Some 2,000 police were deployed around Athens Appeals Court as thousands of protesters demanded long jail terms, carrying banners that read “fear will not win” and “Nazis in prison”, Greek media reported.
Tear gas was fired into the crowd as some of the protesters clashed with police and threw petrol bombs.
People gather outside the Athens courthouse, as they wait for the verdict of the trial of the ultra-right party Golden Dawn (Chrysi Avgi), in Athens
Eleven of the defendants were in the court when the verdict was read out, along with 50 attorneys and 50 journalists.
Greek President Katerina Sakellaropoulou said the verdict was an important day for democracy and proof that Greek institutions were able to “fend off any attempt to undermine them”.
Hundreds of witnesses gave evidence in the trial, which was delayed this year by the Covid-19 pandemic.
Who was on trial?
At the centre of the trial are Golden Dawn leader Nikos Michaloliakos and 18 ex-MPs who were elected in 2012 when the neo-Nazi party came third in national elections on an anti-immigrant, nationalist platform. Golden Dawn no longer has any MPs in parliament.
After they won almost 7% of the vote in May 2012, emboldened supporters attacked political opponents and migrants.
Golden Dawn supporter Giorgos Roupakias had already confessed to the murder of rapper Pavlos Fyssas. The musician was chased down by thugs and stabbed in Piraeus in September 2013.
As the verdict was delivered, Fyssas’s mother Magda cried out, “My Pavlos defeated them alone!”.
What were the verdicts?
The key verdict on Wednesday was that Golden Dawn – Chrysi Avgi in Greek – was a criminal group. Its leadership was found guilty of running it.
They included Michaloliakos and six former MPs – Ilias Kasidiaris, Ioannis Lagos, Christos Pappas, Artemis Matthaiopoulos, Ilias Panagiotaros and Giorgos Germenis. The other ex-MPs were found guilty of joining a criminal organisation.
Magda Fyssa, mother of anti-fascist rapper Pavlos Fyssas, who was murdered in 2013 by a member of Golden Dawn, reacts at the announcement of the ultra-right party Golden Dawn’s (Chrysi Avgi) verdict.
The three judges, led by Maria Lepeniotou, were due to deliver sentencing later.
As well as the fatal stabbing of Pavlos Fyssas, defendants in the trial were also convicted of other violent attacks on migrants and left-wing political opponents.
Photo dated on June 24, 2012 of Pavlos Fyssas. The 34-year-old was fatally stabbed in the working-class Athens district of Keratsini early on September 18, 2013
Five Golden Dawn members were convicted of the attempted murders of Egyptian fishermen and four of the attempted murder of communist activists in the PAME union.
As the Golden Dawn leaders were convicted, very few inside the room applauded but outside thousands began to celebrate.
I felt very satisfied, of course. Because I knew the facts revealed during those five and a half years, and I was always optimistic.
From 2010, Golden Dawn had managed to poison the Greek political system and democratic institutions, securing contacts with the army, the police, the judiciary and the Church.
It is an excellent verdict.
Short presentational grey line
Who is their leader?
Nikos Michaloliakos founded the movement in the mid-1980s and was admirer of Nazism and a Holocaust denier, giving the Hitler salute at party rallies.
But he had always denied any knowledge of the Pavlos Fyssas murder. When police raided his home in 2013, they found weapons and ammunition.
Golden Dawn officially denied being a neo-Nazi movement, but its badge closely resembled a swastika, some senior members praised Adolf Hitler, and the clothing of choice at anti-immigrant protests was black T-shirts and combat trousers.
Witnesses told the trial that members were trained to handle weapons and used Nazi symbols.
Greece’s Golden Dawn: ‘Don’t say a word or I’ll burn you alive’
Jail fails to deter Greek far right
Greek bailout crisis in 300 words
Last December, chief prosecutor Adamantia Economou prompted uproar, with a call for the party officials to be cleared, arguing there was no evidence they had any part in planning or carrying out the series of attacks.
How has Greece reacted
There has been disgust at Golden Dawn across the political spectrum in Greece.
Prime Minister Kyriakos Mitsotakis said he would not normally comment on court decisions but said the Greek republic had first expelled Golden Dawn from parliament and now Greece’s independent judiciary had acted too. “Democracy won today. It is up to us that it wins every day,” he said.
The verdict was praised as “just” and “historic” by Prokopis Pavlopoulos, who was president of Greece until earlier this year.
Centre-left political leader Fofi Gennimata said the decision sent a strong message to Europe that “fascism has no place in our lives”.
Nils Muiznieks of Amnesty International also said the trial sent a clear message: that “violent and racist criminal activity – whether perpetrated by individuals on the street or members of parliament – will not go unpunished”.
Meanwhile, the Jewish cemetery in Athens was daubed this week with anti-Semitic graffiti and Nazi slogans, prompting condemnation from Greek ministers and the Jewish community.
Read More

In what was described by European Jewish Association Chairman Rabbi Margolin as a “fruitful and constructive” meeting with Her Excellency Mrs. Bergdís Ellertsdóttir at the Icelandic Embassy in Brussels today, the Ambassador said that the Circumcision Bill was not a government backed initiative.

The Ambassador and her deputy also suggested that Rabbi Margolin should continue dialogue and make the case against the Bill at the Parliament in Iceland, an offer that will be taken up in the weeks ahead.

“The Ambassador had a very common-sense and pragmatic approach to this issue, and her words were very re-assuring. It is clear from this meeting that this is a party-led initiative and not one that enjoys the initiative or direct support of the Icelandic Parliament as a whole. This on it’s own is a good start.

‘It is our intention is to dialogue directly with Icelandic Parliamentarians and with the Committee responsible in Iceland in the short weeks ahead.

‘Our expressed concern to the Ambassador is the origin of such legislation, given that it only affects, at best 3 Icelandic children per year who would be circumcised for the purposes of the Jewish faith. Why is a such a bill is even required in the first place? It reeks of the type of populism that is all too sadly manifesting itself across the European Continent at the present time. Her Excellency assured us that our remarks would be reported directly back to the Government in Iceland

“The import of such legislation ever becoming law is that it sets precedence for other European nations, and normalises the branding of the entire Jewish population as “criminals” for performing this important, vital and precious rite of ours. It cannot and will not be allowed to happen.”

To watch a video of Rabbi Margolin speaking about the meeting click on the picture. 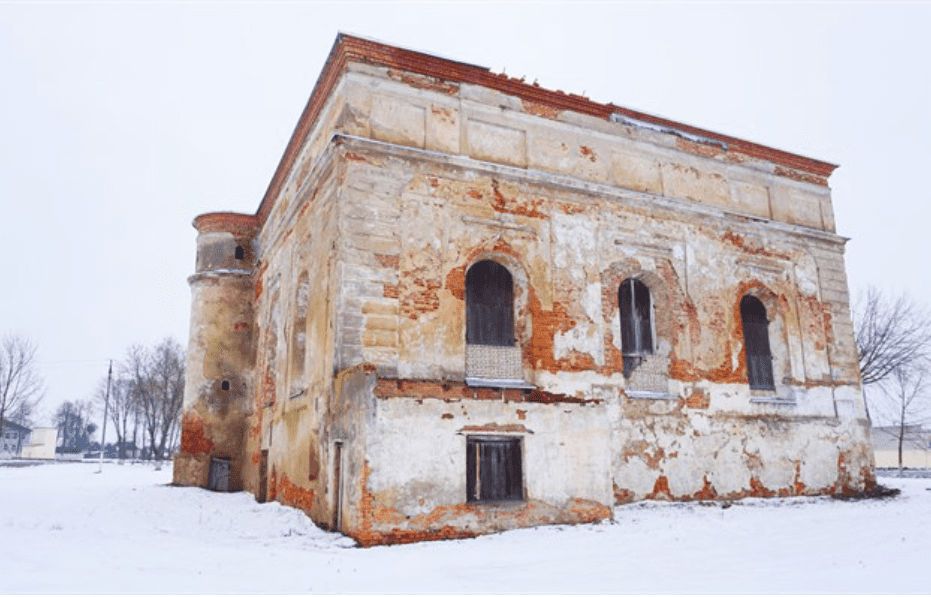 Europe: Synagogues sold for next to nothing

In Eastern Europe, historic synagogues are sold for the price of a used car. 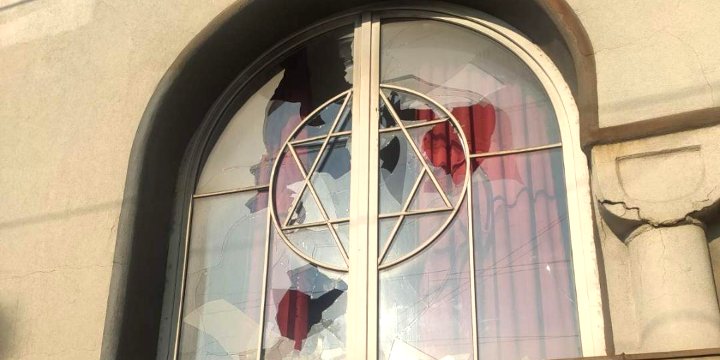 A Jewish cemetery in Belgrade, Serbia was vandalized Wednesday night, when an axe, hammer and stones were thrown through the window of its chapel.
A spokesperson for the Jewish Community of Belgrade told The Algemeiner that the incident had caused serious material damage, noting that if the chapel had been occupied, it could have resulted in “severe physical injuries or even death.”
The spokesperson said that “this act reminds us of Kristallnacht,” the Nazi-led riots against the German Jewish community in 1938.
On Thursday, European Jewish Association Chairman Rabbi Menachem Margolin wrote to Serbia’s Minister of Internal Affairs, calling for a full investigation.

“It is clear that whoever was responsible has no respect for the dead, never mind the living,” Margolin said in a statement. “We extend our support to our Jewish brothers and sisters in Belgrade and Serbia as a whole, who must be reeling at this attack, and feeling vulnerable.”

“I have written to Serbian minister of Internal Affairs asking for a robust response to the attack, as well as a full throated condemnation, lest the antisemites that carried out this act believe that it is now open season on Jewish buildings in Serbia.”

The vandalism is the latest in a series of antisemitic incidents to hit the Belgrade Jewish community. The Jewish Community told The Algemeiner of repeated antisemitic harassment against a prominent Jewish epidemiologist, including graffiti that compared him to the infamous Nazi doctor Josef Mengele, as well as demonstrations outside the epidemiologist’s home in which demonstrators wore yellow Stars of David.
Threats of a second Holocaust have also been received at the Community’s Facebook page, as well as Nazi symbols, antisemitic emails, and other threats.