A golden eagle from Hitler’s bedroom. Nazi toilet paper. A concentration camp “crusher” visor cap. These are only some of the items that will be available for sale on July 28 and 29 at Alexander Historical Auctions, a prominent Maryland-based auction house.

European community leaders have urged the auction house to cancel the event. In a letter signed by Rabbi Menachem Margolin — chairman and founder of the European Jewish Association — signatures argued that the “sale of these items is an abhorrence,” and stated that “every Jewish family living today had relatives murdered or who were interned simply for being Jewish.”

Co-signers include Binyomin Jacobs, Chief Rabbi of the Netherlands, Rev. Cornelis Kant, Executive Director of Christians for Israel International, and Andrew Cohen, President of the Federation of Synagogues in the United Kingdom.

View the article on the Alexander Historical Auctions will be auctioning off valuable items owned by Nazi officials and used for the persecution of Jews during World War II, including a gold watch that belonged to Hitler.

European Jewish Association Chairman Rabbi Menachem Margolin
The Belgian Constitutional Court upheld a ruling of the European Court of Justice that member states of the European Union can ban religious slaughter without pre-stunning. The ban voted by the Flemish and Walloon regions has been challenged by Jewish groups who argue that under freedom of religion, which is protected by the European Union as a human right, EU legislation allows exemption on religious grounds for non-stunned slaughter provided that they take place in authorised slaughterhouses, writes Yossi Lempkowicz.
“The Belgian Constitutional Court has shamefully upheld a decision that is openly hostile to a fundamental pillar of Jewish practice,’’ stated Rabbi Menachem Margolin, Chairman of the European Jewish Association, in a reaction to the decision by Belgium’s Constitutional Court on Thursday to uphold a decision by the European Court of Justice banning religious slaughter without pre-stunning, thereby also upholding a similar decision by the Belgian Walloon and Flemish regions. Lamenting the court decision, he said however that provided an opportunity for European countries to show their support to Jewish communities and protect this central tenet of faith and practice. “What gets to the Jewish Communities the most is the two-faced approach of some countries towards Jewish Communities. On the one side they are solidly supportive when it comes to the fight against antisemitism, on the other they have no difficulty in effectively legislating Jewish faith and practice out of existence. ‘ Rabbi Margolin continued, “Worse still these countries are blissfully ignorant of this massive contradiction and its catastrophic effects on Jews across Europe. This decision, if replicated, is a real threat to Jewish life across Europe. Every bit as threatening as rising antisemitism, and in a sense even worse as it directly targets the very tenets of our beliefs. Now is the time for European countries to stand behind their Jewish communities and leave Belgium isolated and an outlier of how not to treat Jews”. The European Jewish Association is a Brussels-based advocacy group representing Jewish communities across Europe.

(July 31, 2022 / JNS) Jewish leaders have slammed the $1.1 million sale by a Maryland auction house of a watch given to Nazi leader Adolf Hitler, United Press International reported on July 30.

Alexander Historical Auctions sold the Huber watch on July 28 “as part of a collection that included a dress belonging to Hitler’s wife, Eva Braun, and other Nazi items looted from the couple’s vacation home in 1945,” said the report.

It noted that the auction house “routinely sells controversial memorabilia.”

The latest sale prompted 34 Jewish leaders to write an open letter condemning the auctioning of items “belonging to a genocidal murderer and his supporters.”

Rabbi Menachem Margolin, chair of the European Jewish Association, said in a statement: “The sale of these items is an abhorrence. There is little to no intrinsic historical value to the vast bulk of the lots on display.”

EJA Chairman, Rabbi Menachem Margolin , wrote a letter today to the head of Global Policy at Airbnb on the issue of West Bank de-listing
Here you can read the latter that was sent:
Dear Mr Lehane,
Re: Air Bnb West Bank de-listing
One can currently rent many Air bnb properties in Gibraltar, Northern Cyprus, Western Sahara, Kashmir and even the Falkland island I’m told, should you be so inclined.

In a statement Monday, Airbnb announced 200 listings in the West Bank would be removed, after the company had concluded “they are at the core of the dispute between Israelis and Palestinians.
Your company said the decision to remove the listings came after “considerable time” was spent consulting experts on the Israeli-Palestinian conflict. Airbnb said that, as an industry leader, it “must consider the impact we have and act responsibly.”
Given that you still operate in many other countries whose territories are disputed, I feel I must ask what your position is towards the millions of disgruntled Spaniards, Western Saharans, Cypriots and the Argentinians? Do they not have an impact too on Air bnb? What about your responsibility to them?
I ask because as of this morning, as I type this, you can rent properties in all of these disputed territories places on Air bnb.
Dear Mr Lehane, I would ask you what marked Israel out for special treatment amongst all the places around the world where territory is disputed? As a ‘responsible’ company, it is incumbent to be consistent.
This consistency is clearly not in evidence here. It therefore strikes me that this decision is political. It is clear to everyone involved that the final status of the West Bank is to be subject of negotiations, just as other contentious places around the world.
What’s the difference between renting in Northern Cyprus, or Gibraltar and the West Bank? Looking at it in the cold light of day, clearly nothing. All of these places, as Gibraltar proved this week having waded in to the Brexit debate, pop up regularly on the radar, as arguments.
Any serious analysis of this decision shows it has nothing to do with a reasoned, impartial and balanced attempt at corporate social responsibility, as your company claims.
I believe this decision will damage the air bnb brand. Not only because it overlooks and ignores the millions of other air bnb users who would take issue with properties in other disputed territories, but because your own criteria for responsibility and impact are not uniformly applied, opening you to letters such this that accuse your company of partisan politics.
I would urge you Sir, as head of Global Policy to rescind this move forthwith.
Yours Faithfully,
Rabbi Menachem Margolin
Chairman 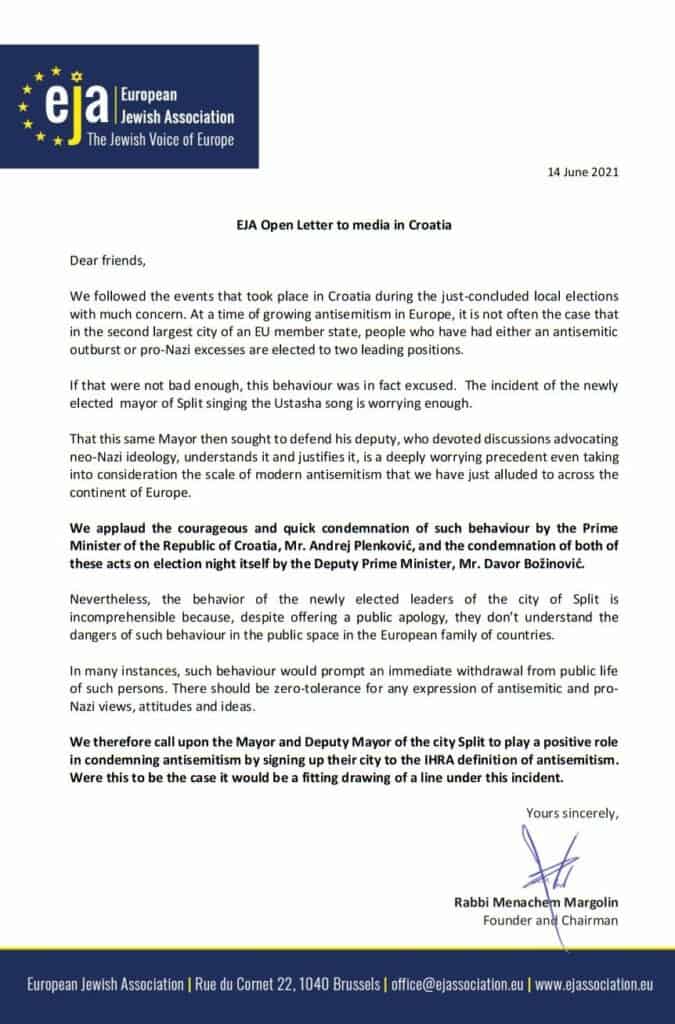 In an open letter to the media in Croatia, the EJA called on the newly elected leaders of the city of Split - Mayor Ivica Puljko and his deputy Bojan Ivosevic – both of whom recently used anti-semitic references during their election campaign, to adopt the IHRA definition of antisemitism in order to draw a line under the incident.
Our Chairman Rabbi Margolin wrote "At a time of growing anti-Semitism in Europe, it is concerning that in the second largest city of an EU member state two people who made anti-Semitic outbursts or pro-Nazi excesses are elected to two leading positions," the letter said.
"We welcome the courageous and quick condemnation of such behavior sent by the Prime Minister of the Republic of Croatia Andrej Plenković, as well as the condemnation of Deputy Prime Minister Davor Božinović both (Puljko and Ivošević) on election night…in many cases, such behavior would result in the immediate withdrawal of that person from public life… the European Jewish Association believes that the adoption of the IHRA definition of anti- Semitism in Split would be appropriate to draw a line under this incident."