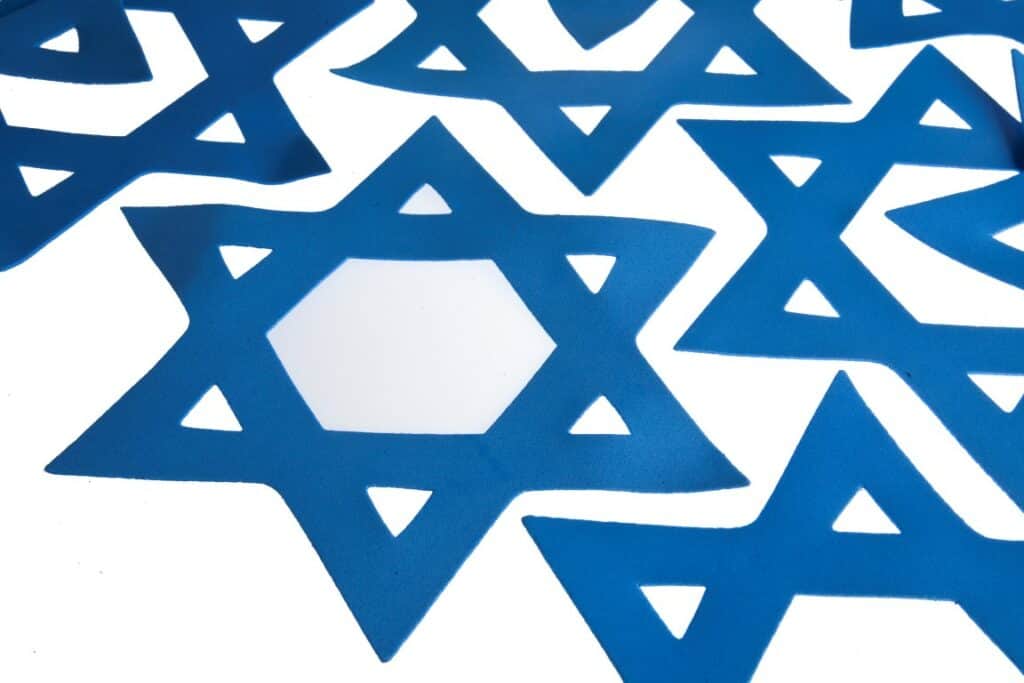 The European Jewish Association is proud and delighted to welcome another organisation to our growing roster of partners and communities.
We have just concluded and signed a memorandum of understanding with The Jewish Community of Netherlands Israeelitische Hoofdsynagoge Arnhem (NIHS-Arnhem)
When two dynamic and active Jewish organisations get together and agree to work closely with one another, beautiful and important things flow from this. We look forward to working for the betterment of Dutch and European Jewry together. 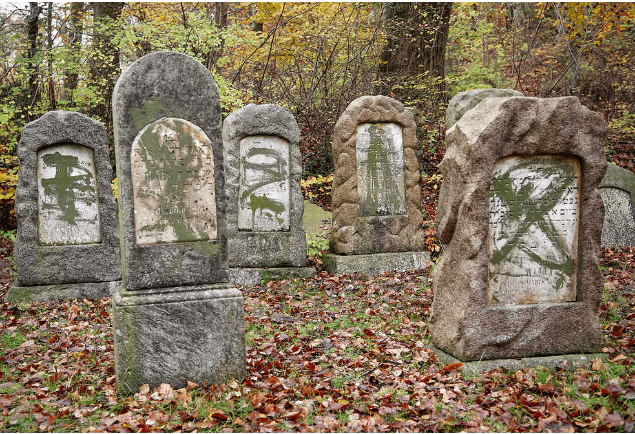 “FOLLOWING DESECRATION OF 80 HEADSTONES IN DENMARK, EUROPEAN JEWISH HEAD SAYS EU LEADERS MUST STEP UP NOT ONLY SECURITY BUT EDUCATION.

“If people are willing to attack the graves of the dead, we shudder to think what they would do to the living given the chance” add Rabbi Menachem Margolin.

Following the attack on 80 gravestones in Randers, Denmark, on Sunday, European Jewish Association Chairman Rabbi Menachem Margolin called on EU Leaders to step up security arrangements at Jewish sites and buildings and to double their efforts in education when it comes to rising antisemitism across the continent.

“We must generate a vehement and strong societal action against antisemitism, because if people are willing to attack the graves of the dead, we shudder to think what they would do to the living given the chance”, said Margolin.

“The attack at the weekend represents another episode in the rising trend of antisemitic attacks across the continent as a whole.

“I want to be clear. Governments can only do so much. The fight against antisemitism needs to be ‘ground up’, as well as ‘top down’. And that comes through education. Initiatives and activities in schools must be prioritised that clearly delineate antisemitism as a malignant symptom that must be urgently eradicated today.

“Following this latest attack, and taking into account the rising figures in Denmark and across the continent as a whole, now is also the time for Leaders across the EU to step up their security support for communities across Europe.

“We must ensure that the widespread silence and shoulder shrugging following attacks within society are replaced with concern and a vocalisation of it’s unaceptability in modern society. To this end, we are asking all EU leaders to double their efforts today.” 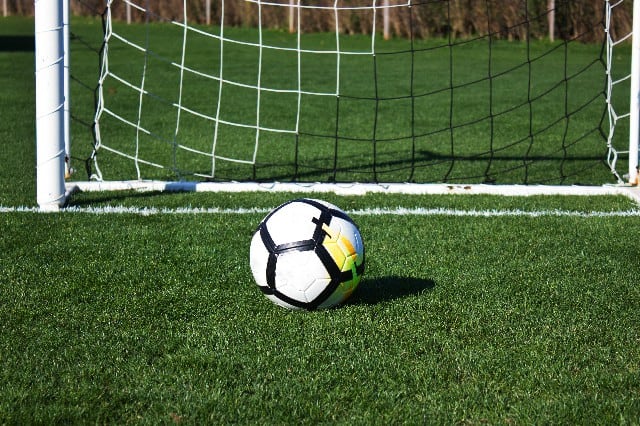 The Union of European Football Associations (UEFA) announced on Tuesday it will open an investigation into the antisemitic abuse hurled at Maccabi Haifa fans during a match against Union Berlin on Thursday.
During the UEFA Conference League match, in which Haifa lost 3-0, Union Berlin supporters made antisemitic gestures and slurs towards fans and even attempted to set fire to the Israeli flag.
In addition, Berlin Police are also investigating one Union Berlin supporter who shouted "sieg heil" several times during the match, according to Firstpost.
Read More :
https://www.jpost.com/diaspora/antisemitism/uefa-announces-probe-into-antisemitism-at-maccabi-haifa-game-in-germany-681147
Read More 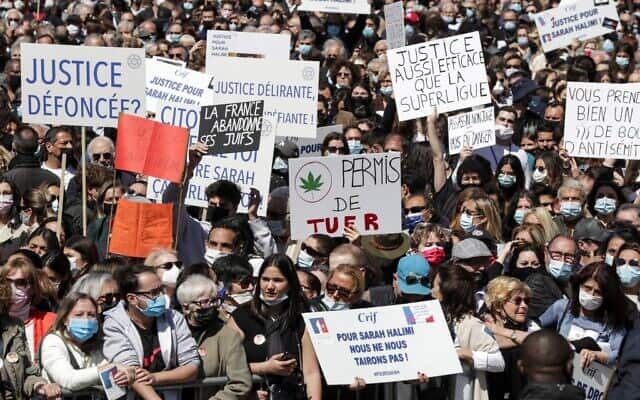 In France, some 25,000 demonstrate against court decision that Jewish woman’s killer was too stoned to be held criminally responsible
Protesters gathered in Paris, Tel Aviv, Jerusalem, and London on Sunday to demonstrate against the ruling of France’s highest court that the killer of a Jewish woman in the French capital was not criminally responsible because he had smoked marijuana before the crime.
Sarah Halimi, a 65-year-old Orthodox Jewish woman, was pushed out of the window of her Paris flat to her death in 2017 by neighbor Kobili Traore, who shouted “Allahu Akbar” (“God is great” in Arabic).
But in a decision earlier this month, the Court of Cassation’s Supreme Court of Appeals upheld rulings by lower tribunals that Traore cannot stand trial because he was too high on marijuana to be criminally responsible for his actions.
Some 25,000 protesters, many of them Jewish, gathered in Paris to demand justice for Halimi.
Under the banner of “Justice for Sarah Halimi,” the rally at Trocadero Square overlooking the Eiffel Tower reflected the widespread indignation of many French Jews at the April 14 ruling by their country’s highest court.
It was held under tight security arrangements in a cordoned-off enclosure where the Jewish umbrella group CRIF played a video on a giant screen in which French Chief Rabbi Haim Korsia demanded another “trial of facts,” even if it ends without sentencing of Traore.
The rally Sunday was the first time in decades that a large number of French Jews gathered to protest against organs or actions of the French state.
“The clamor has risen and hope has returned. That hope is all of you here,” Halimi’s brother William Attal told a crowd of several thousand at the Trocadero esplanade in Paris.
The MP who leads Macron’s Republic on the Move party, Christophe Castaner, addressed the protest, which was also attended by opposition leaders and by several well-known actors.
Jacques Essebag, a French-Jewish comedian who is known by the stage name Arthur, in a video message said he has “decided to start using drugs because in France you can do whatever you want, even kill your neighbor if you don’t like her, if you use drugs.” He then added: “What has become of this country?”
Former French first lady Carla Bruni, wife of Nicolas Sarkozy, also appeared at the Paris rally, as did Mayor Anne Hidalgo, who said the city would soon name a street in Halimi’s memory.
“It will also be a way of doing her justice,” Hidalgo said.
However, the video message from Hidalgo, a Socialist politician, provoked whistles and booing from many protesters at the event, which did not feature live speeches due to COVID-19 measures.
Organized by the CRIF umbrella of French Jewish communities, the rally was called “to show our astonishment at a decision that conforms to the law, but not to justice,” CRIF said.
The event featured many French and Israeli flags, and those of the far-right Jewish Defense League.
More than 20,000 people demonstrated in Paris, and up to 2,000 took part in a march in the Mediterranean city of Marseille, police said, while around 600 gathered outside a synagogue in the eastern city of Strasbourg.
Three protests were also held in Israel, all taking place at 3 p.m. in order to coincide with the demonstration by the Jewish community in Paris. The main demonstration was in front of the French Embassy on Herbert Samuel Street in Tel Aviv.
The Jewish community in the United Kingdom also demonstrated in front of the French Embassy in London on Sunday at 1 p.m., in solidarity with the community in France. Attendance was limited because of COVID-19 restrictions.
In addition to the rally in Paris, protest rallies were planned to take place on Sunday in Marseille, Strasbourg and Lyon. Abroad, rallies were scheduled to be held in Washington, DC, Los Angeles and Miami in the United States as well as in Rome, Italy.
Some Jewish organizations have used harsh language about the case, including the conservative Europe-Israel group, which called it “the new Dreyfus Trial.” It’s a reference to the anti-Semitic treason charges leveled at a French-Jewish soldier in 1894, and which many to this day believe showed that French society and European societies, in general, were too anti-Semitic to allow Jews to truly integrate.
Israel blasted the decision of the French court last week.
“Sarah Halimi was murdered for clearly anti-Semitic motivations, for the sole reason that she was a Jew,” Foreign Ministry spokesman Lior Hayat told The Times of Israel. “This was a despicable murder that harmed not only the victim herself and her family, but also the entire Jewish community’s sense of security.”
“The way to confront anti-Semitism is through education, zero tolerance, and heavy punishment,” Hayat continued. “This is not the message that the court’s ruling conveys.”
Sarah Halimi was beaten before she was thrown off her Paris apartment building’s roof in April 2017. (Courtesy of the Halimi family)
Critics of the ruling cited apparent composure by Traore, an immigrant from Mali who was 27 when he killed Halimi, a physician in her 60s. Traore, whom a lower court said targeted Halimi because she was Jewish, called her a demon as he pummeled her in her third-story apartment, which he entered by force.
He then threw her out the window and shouted: “A lady fell down from the window!” to cover up his actions, witnesses said. He left the scene, allegedly to escape it, and was arrested on a nearby street.
Others argue that even if Traore was psychotic, he was criminally liable when he took the drugs that made him psychotic and should therefore stand trial. He has no documented history of psychiatric problems.
French President Emmanuel Macron has said he would advance legislation to prevent criminals from avoiding trial by using an insanity defense for actions committed under the influence of drugs.
Read more

The EJA warmly thanks H.E. Zoran Tegeltija, Chairman of the Council of Ministers of Bosnia and Herzegovina, for His Excellency's kind wishes to the European Jewry in light of the recent holiday of Rosh Hashanah (Jewish New Year).