October 28, 2021
Belgium
Jewish freedom of religion is under direct attack across Europe from the very institutions that have vowed to protect our communities, says European Jewish Association Chairman Rabbi Menachem Margolin, after the Greek Supreme Court ruled that slaughter without stunning violates EU law.
The move comes as a consequence of the European Court of Justice Ruling last December that member countries may ban the practice of ritual slaughter in order to promote animal welfare, without infringing the rights of religious groups.
The December ruling said that the EU’s animal slaughter regulation “does not preclude member states from imposing an obligation to stun animals prior to killing which also applies in the case of slaughter prescribed by religious rites”, but encouraged member states to find a balance.
It is now clear that a number of member states are zealously applying the former whilst ignoring the latter.
In a statement this evening, the Chairman of the Brussels-based European Jewish Association, which represents hundreds of communities across the continent, said: “We warned in December about the downstream consequences that the European Court of Justice ruling carried with it, and now we see the outcome. Jewish Freedom of Religion is under direct attack. It started in Belgium, moved to Poland and Cyprus and now it is Greece’s turn.
“These direct attacks are coming from many of the same governments and institutions who have sworn to protect their Jewish Communities. What we are witnessing is rank hypocrisy. When it comes to antisemitism, governments and institutions rightly stand behind us. But when our faith and practice is assailed left and right by laws, they are nowhere to be seen, nowhere to be found. What use is it to protect Jews while legislating fundamental pillars of our religion out of existence?
"We will be urgently making representations to the highest levels of the Greek government to get direct answers to this simple but fundamental question: How can there be Jews in Europe if you keep bringing in laws against us?"
https://www.israelnationalnews.com/News/News.aspx/315829 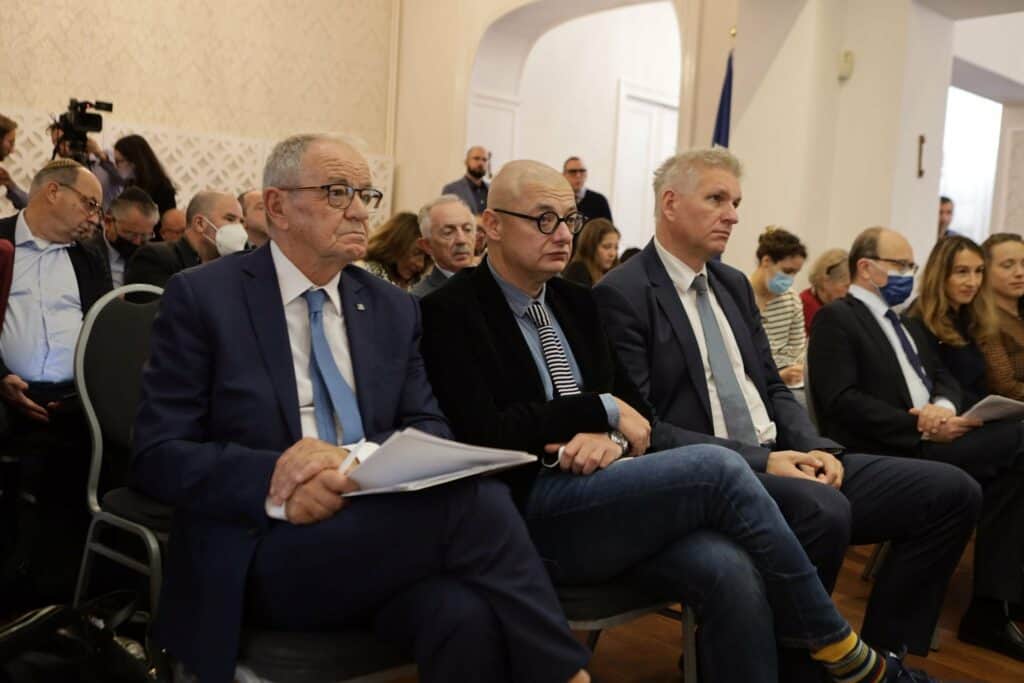 Leaders of European Jewish communities criticized the absence of reference to religious freedoms in an European Union plan to fight antisemitism and strengthen Jewish life.
“They took the easy path and failed to do the right thing,” Rabbi Menachem Margolin, the chairman of the European Jewish Association, a Brussels-based lobby group, said at a conference Tuesday about the strategic plan that the European Commission published last week.
Titled “EU Strategy on Combating Antisemitism and Fostering Jewish Life (2021-2030),” the 46-page document published Oct. 6 reiterated several long-term goals and principles of various EU institutions regarding antisemitism, including the adoption of an EU definition of it by members states and educating young people against stereotypes.
Read More:
https://www.jpost.com/diaspora/antisemitism/eu-plan-to-fight-antisemitism-not-serious-jewish-community-leaders-say-681955
Read More 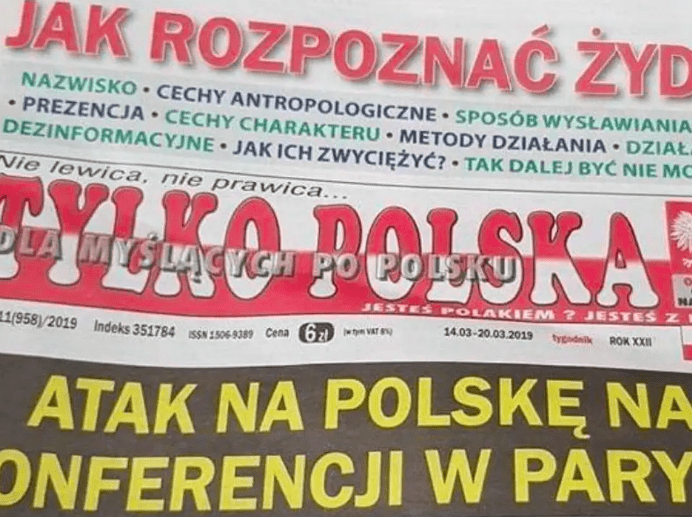 MP says it is ‘absolute scandal’ such ‘filthy texts, as if taken from Nazi newspapers’ sold in parliament
A right-wing newspaper in Poland has published an article on its front page instructing readers on “how to recognise a Jew”.
The Tylko Polska, or “Only Poland”, ran a list of “names, anthropological features, expressions, appearances, character traits, methods of operation” and “disinformation activities” which it said could be used to identify Jewish people.
“How to defeat them? This cannot go on!” the front page also said, according to the Jewish Telegraphic Agency.
The article was printed alongside a headline reading “Attack on Poland at a conference in Paris”, a reference to a Holocaust studies conference last month whose speakers were accused of being anti-Polish.
The newspaper caused an outcry among Polish politicians when it was distributed in the Sejm, the lower house of the Polish parliament.
Michal Kaminski, an MP for the centre-right Poland Comes First party, said it was an “absolute scandal” such “filthy texts, as if taken from Nazi newspapers” were sold in the Polish parliament, Polsatnews reported.
Mr Kaminski asked for an explanation from parliament speaker Marek Kuchcinski, a member of the ruling right-wing Law and Justice party, for how such an “antisemitic” front page was made available in parliament.
The director of the Sejm Information Centre, Andrzej Grzegrzolka, initially said his office could not take action as the paper was being sold from kiosks inside the Sejm who were responsible for the choice of newspapers.
He also suggested a court could look into the front page and decide whether the title should be suspended under Polish law, which bans hate speech motivated by race or religion.
However, Mr Grzegrzolka later announced his office would request the publication be removed from the Sejm’s press kit.
The newspaper’s front page also featured an image of Jan Gross, a Polish-Jewish academic at Princeton University who has courted controversy for suggesting Polish people were complicit in the murder of Jews during the Holocaust.
Mr Gross’ argument that Poles collaborated with the Nazis during the Second World War has made him a regular target of outrage by Polish nationalists.
The article was published by the Independent 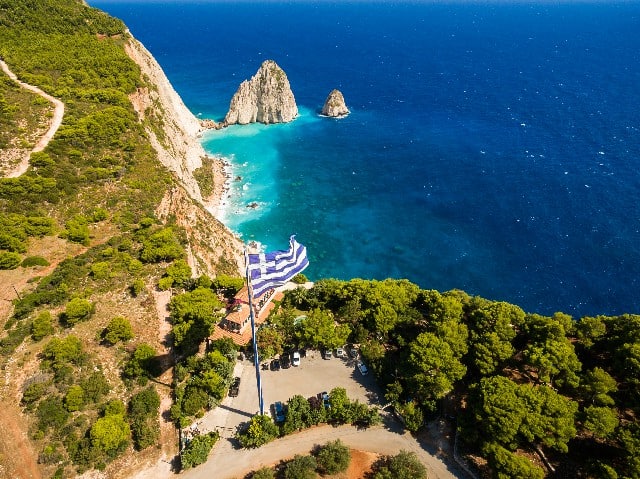 The Hellenic Council of State banned kosher and halal slaughter on Tuesday. Kosher and halal preparations of animals are central to Jewish and Muslim religious practices.
Both practices require animals to be killed without being anesthetized. The Panhellenic Animal Welfare and Environmental Federation requested that the court annul an exemption in a law that allowed religious slaughtering practices to take place without anesthetic.
The courts ruled that the religious preparation of animal products did not outweigh those animals’ welfare, and decided that the exemption was a violation of the law’s requirement to slaughter animals with anesthesia. The court has left it up to the government to regulate the relationship between animal rights and religious freedom, and they will preside over the country’s slaughterhouse practices.
Many Jewish people are speaking out against the court’s decision, calling it an infringement on their religious freedom. European Jewish Association (EJA) chairman Rabbi Menachem Margolin said that “Jewish freedom of religion is under direct attack across Europe from the very institutions that have vowed to protect our communities.”

The EJA believes that the court’s decision is following a precedent set last December by the Court of Justice of the European Union, which gave EU nations the ability to ban kosher slaughter in support of animal welfare while also allowing for religious freedom for affected religious groups.
The decision allows members of the EU to make their own decisions about how to follow animal welfare guidelines while allowing people to practice their religions. But the EJA believes that “it is now clear” that member states are leaning heavily in favor of animal welfare and neglecting religious groups.

“As early as last December we warned about the dangerous consequences of the European Court of Justice ruling, and now we are seeing the result,” Margolin said. “It started in Belgium, moved to Poland and Cyprus and it is now Greece’s turn. These direct attacks come from many of those governments and institutions that have vowed to defend their Jewish communities.”

“What we are witnessing is first-rate hypocrisy,” he said. “When it comes to antisemitism, governments and institutions rightly stand behind us. But when our beliefs and customs are attacked right and left by laws, they are nowhere to be seen.”

Margolin said that the EJA plans to air their grievances at the highest level of the Greek government, hoping to get engagement and dialogue about how they can practice their religion comfortably in Greece. The EJA leader considers the issue of high importance, as food preparation and slaughter practices are central parts of both Jewish and Muslim religions.
“How can Jews live in Europe if you continue to legislate against us?” said Margolin.