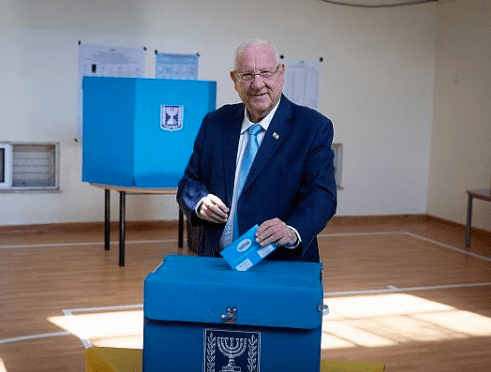 Israel Elections Day: Rivlin urges public to vote in rerun, promises they won’t have to do it again

President says he’ll do what he can to avoid a third election in a row amid deadlock predictions, tells Israelis ‘It is a real necessity’ to cast ballots 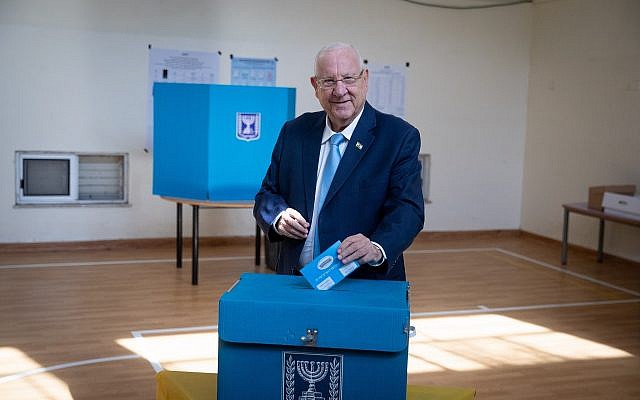 President Reuven Rivlin casts his ballot at a voting station in Jerusalem, September 17, 2019 (Yonatan Sindel/Flash90)
President Reuven Rivlin promised to do everything he could to make sure Israelis do not have to cast ballots again a few months down the line, as the country headed to the polls Tuesday for an unprecedented rerun election.“I will do everything I can to prevent further elections and to establish a government quickly,” Rivlin said in a statement early Tuesday.Rivlin has made similar promises several times in recent weeks, including a video published Monday night urging Israelis to vote once and then not again for a while.“We must remember that, in the game of democracy, influence happens only through the ballot box,” Rivlin said in the video which was posted to his official Facebook page.“I, for my part, will do everything in my power, within the framework of the law and authority given to me by my post, to establish a elected government in Israel as quickly as possible, and to avoid another election campaign,” the president promised. 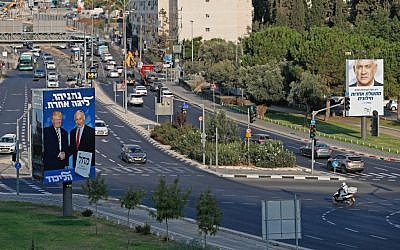 This picture taken on September 16, 2019 shows Israeli election billboards on a street in Jerusalem for the Likud and Blue and White parties. (AHMAD GHARABLI / AFP)

Casting his vote on Tuesday morning at a polling station set up in a Jerusalem school, Rivlin implored voters in Hebrew and English to vote.“You must vote. It is a real necessity,” he said.As president, one of Rivlin’s responsibilities is choosing a candidate to attempt to form a government after elections.In April, he handed that task to Likud leader Benjamin Netanyahu, who then failed to garner enough support for a government. Rather than allow Rivlin to select another candidate, Netanyahu engineered the collapse of the Knesset and called new elections for September 17.Rivlin said he understands the “feeling of frustration” among the public at having to go back to the polls. 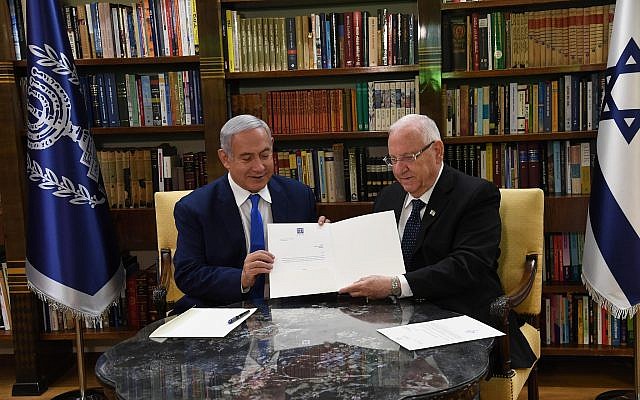 Surveys have shown Netanyahu and chief rival Benny Gantz of the Blue and White party both still likely falling short of being able to form a government without reaching across the aisle.Rivlin said he will task someone with forming a government within three days of receiving the confirmed finals results from the  Central Elections Committee on September 25. The president usually gives the mandate to the person recommended by most lawmakers during consultations, but he has some leeway on the matter, one of his only non-ceremonial roles.The selected lawmaker will then have 28 days to produce a government. Although Rivlin can grant an extension of up to 14 days, the president stressed that he can also choose to give a shorter extension.He said if they fail to form a government he will give another lawmaker a chance, unless no suitable candidate is found, in which case 61 MKs can ask him to give the mandate to any chosen lawmaker, including the MK who was given first shot.Ultimately, the Knesset must give a vote of confidence for any new government, and without that the country would need, “God forbid,” to hold third elections, Rivlin said.The article was published on The Times of Israel

The New Antisemitism In Europe.

The L'obs had interviewed European Jewish Association Chairman, Rabbi Menachem Margolin, as part of L'Obs comprehensive report on the subject of New Anti-Semitism in Europe.
You can find the entire report here: 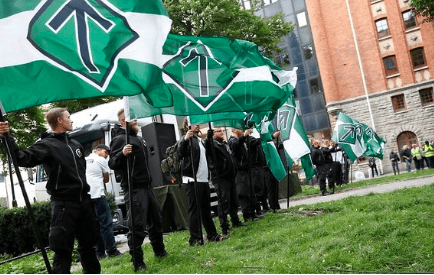 Research published by Gatestone Institute concludes various municipalities use money to endorse anti-Semitic groups such as Group 194, arrange school lectures by pro-Palestinian movements.
Sweden's municipalities and government are directly and indirectly funding anti-Semitic organizations, according to a research conducted by Gatestone Institute for International Relations.
The research was published by Nima Gholam Ali Pour, a member of the board of education in the Swedish city of Malmö, as well as a participant of several Swedish Middle East teams.
In addition, he is the editor for the social conservative website "Situation Malmö," and has published books.
The research report also concluded that Malmö's municipality is using tax payers' money to endorse Group 194—an organization that posts anti-Semitic content on its Facebook page, such as a caricature of a Jew drinking blood and feeding on a child.
The research argued that anti-Semitism originating in the Middle East is also funded by Swedish public money.
Therefore, when anti-Semitic scandals occur in the Scandinavian country, those tasked with addressing them are often the same officials responsible for distributing the offensive material that led to them.
Moreover, no effective action is currently being taken against the spread of anti-Semitism in Sweden.
Ali Pour concluded that the direct and indirect governmental funding of anti-Semitic organization should be scrutinized and immediately halted.
He adds that as long as the funding continues, Sweden's Jews will continue living in a perpetual state of fear and insecurity.
Big Swedish cities such as Malmö have become known as places in which Jews feel threatened, and the country's increasingly prevalent anti-Semitism has drawn international attention.
In December of 2017, Muslims demonstrated in front of a synagogue in Malmö and a Molotov cocktail was thrown at a prayer room in a Jewish cemetery following US President Donald Trump's recognition of Jerusalem as Israel's capital.
"We want our freedom back and we'll shoot the Jews," the anti-Semitic demonstrators shouted in front of the synagogue.
Molotov cocktails were also hurled at a synagogue in the Swedish city of Gothenburg.
Furthermore, representatives of the Youth Against Settlements (YAS) organization based in Hebron are visiting and lecturing in Swedish high schools against Hebron's Jewish residents.
One of the high school students who attended YAS's lectures in February 2018 said that the anti-Semitic organization had argued that there are checkpoints all across Israel and that Arabs are routinely beaten and killed.
It was also said the Palestinians are living in concentration camps similar to those set up by the Nazis in in WWII.
"They talked a lot of nonsense and made us to take pictures with their flag," one of the high school student said.
"The most controversial thing they said was that the Jews control the United States and the media," another student added.
Zelika El Motsev and Anas Amro, YAS's representatives across Sweden, were described in the media as "peace activists," while they praised stabbing attacks, Shahids (martyrs) and Arab uprising on their Facebook pages.
Yes's spokespersons were invited to speak before public institutions in Sweden and country's Foreign Affairs Minister Margot Wallstrom met with them during her visit to Ramallah in December 2016.

The article was published on Ynet
Read More 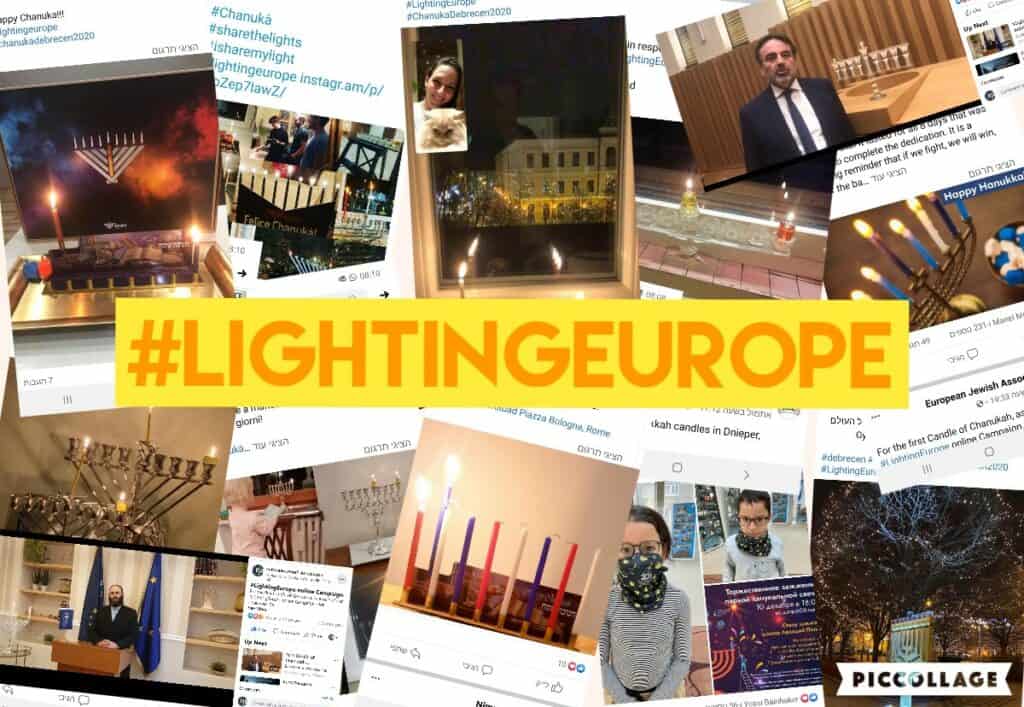 We hope you all had the chance to light the candles yesterday with your loved ones and maybe have a Sufganiya or two...
Many have joind us yesterday to spread the light on social media as well under the #LightingEurope campaign...
There are still 7 days to go and much light to bring all across Europe.
Join us today and the days after! all you have to do is post a pictue with your menorah and use the hashtag #LightingEurope.
Happy Chanukah!