While European Commissionner for Neighbourjhood Policy Oliver Várhelyi, told a conference in Brussels on Tuesday that EU taxpayers’ money should not be used to fund antisemitic activities and incitement to hatred, European Commission President Ursula von der Leyen announced on the same day that that EU funds for Palestine would be unlocked after “difficulties” were overcome.

“As Team Europe, we are the largest donor in Palestine, with around EUR 600 million per year,” von der Leyen said at a press conference following a meeting with Palestinian Authority Prime Minister Mohammad Shtayyeh in Ramallah.

“I am very glad to announce that the EU funds for 2021 can be disbursed rapidly. All the difficulties are gone, we have made clear that the disbursement will take place,” she said.

The EU gave the green light to funding for the Palestinian Authority on Monday, as von der Leyen arrived for a two-day visit to the Middle East.

‘’It is important to have this EU funding to support the people, especially the most vulnerable. It also helps create the right conditions for economic opportunities,’’ she added.

Twenty-six out of 27 EU member states backed a proposal to remove conditionality on funding for the Palestinian Authority. Only Hungary opposed.

Hungarian Commissioner Oliver Várhelyi blocked the funding last year, arguing it should be contingent on changes to the content of Palestinian textbooks which have antisemitic content and incite to hatred.

In  May, the European Parliament condemned the Palestinian Authority  for the third consecutive year for its abuse of EU funding used to draft and teach new violent and hateful textbooks ‘’worse than previous editions.’’

At the conference organised Tuesday by the European Jewish Association in the European Parliament, Várhelyi stressed that ‘’it is our credibility to fight any form of antisemitism therefore, incitement to hatred, violence and terror.’’

‘’What starts with incitement to hatred and violence becomes terror. And prevents coexistence,’’ he added, withiout specifically mentioning the Palestinian textbooks.

‘’Incitement not only poisons the minds of children, but also cements the view in many that there is no prospect for peace and a solution of the conflict,’’ the Commissioner said.

‘’The EU cannot be a credible actor neither in Europe nor in the Middle East and beyond if we do not deliver on these fundamental commitments,’’ he said.

He added, ‘’Regretfully, antisemitism is on the rise in Europe and across the world.
What is even more troubling is that even fundamental commitments in the EU for this fight seem to be weakening, if not disappearing. One might never have anticipated that the fight against antisemitism will be negotiable in Europe. Or even worse, be taken over by other considerations when certain decisions are made. Standing up against antisemitism should never become a question of majorities.’’

‘’For me, there can be no compromise and no discount on these fundamental principles. It must be non-negotiable.’’

‘’You can count on my personal dedication and firm commitment to deliver on these principles. We are working hard to translate this commitment into real actions on the ground, to make an impact and deliver real results,’’ Várhelyi concluded.

Israel’s Minister for Immigration and Absorption, Pnina Tamano Shata, who spoke at te conference, also addressed the challenge of rising antisemitism and terror. ‘’The European Union has the responsibility to take all necessary steps to counter all forms of antisemitism, whether from the far right or from the far left, where it is often disguised as anti-Zionism. A native of Ethiopia, the minister underlined the role played by Israel in helping refugees from Ukraine feel at home. 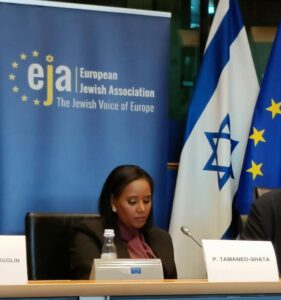 Rabbi Menachem Margolin, Chairman of the European Jewish Association, noted that ”Israel has not only become a homeland and refuge to the Jewish People but it has also become a place of safety and refuge for people from all over the world.”

He called on Europe’s leadership not to perpetuate refugees status not in Europe, not in the Middle East a,d nowhere else in the world. Refugees need to receive assistance but also and especially tools and encouragement to take responsibility for themselves, continue their lives and contribute of themselves for the benefit others who need them,” Margolin said.

The event was hosted by MEP Antonio López-Istúriz White, Chairman of the European Parliament Delegation for Relations with Israel, who noted that after the Abraham Accords, which led to the normalisation of relations between Israel and several Arab countries, ”the EU and Israel could be entering into the best relationship yet.” ”We are united by our values and in our common fight against terrorism,” he said.