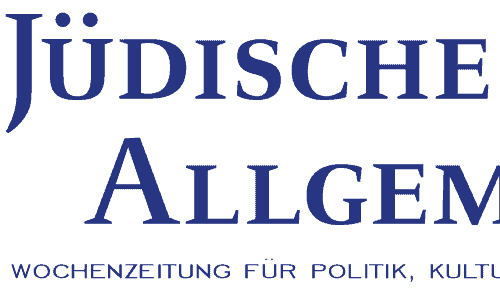 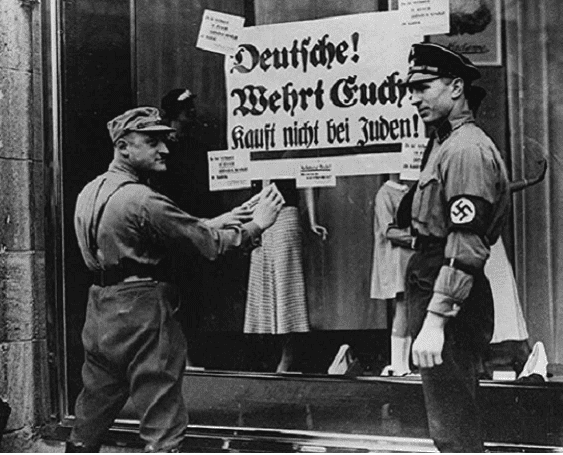 Pope Francis said recently that he was “concerned because we hear speeches that resemble those of Hitler in 1934.” He was talking about the rise of extreme nationalism and populism, which he feared could lead to the fragmentation of the European Union. The pope should be worried about any current resemblances in Europe to the Nazi past, but the pope’s praise of the European Union as an antidote is premature. Indeed, the European Union itself is on the verge of reviving the Nazis’ stigmatization of Jewish-made products on the pretext that they come from “occupied” Palestinian territories.
According to sources cited by the Washington Beacon, “The European Union is poised to mandate that Israeli products made in contested territories carry consumer warning labels,” which is seen by Jews as “an ominous warning sign that they say is reminiscent of Holocaust-era boycotts of Jewish businesses.” The Advocate General of the European Court of Justice recently issued a non-binding opinion to the effect that EU law requires the labeling of such products as coming from “settlements” and “Israeli colonies.” He analogized this situation to the European boycott of South African goods during its apartheid period. “The absence of the indication of the country of origin or place of provenance of a product originating in a territory occupied by Israel and, in any event, a settlement colony, might mislead the consumer as to the true country of origin or place of provenance of the food,” the Advocate General said, referring to food products. Israeli occupation and settlements could be “an objective factor which might affect the expectations of the reasonable consumer,” he added.
Brooke Goldstein, a human rights lawyer and executive director of the Lawfare Project who has fought the anti-Israel Boycott, Divestment and Sanctions (BDS) movement in various courts, remarked, “The Advocate General’s opinion said that goods produced by Muslims are to be labeled from ‘Palestine,’ and goods produced by Jews labeled as coming from ‘Israeli colonies.’ Both people are living in the same geographic location, and yet Jewish goods are being treated differently.”
Discrimination on the basis of religion is a transgression of basic human rights that violates Article 26 of the International Covenant on Civil and Political Rights.
The EU Court of Justice’s 15 judge panel is expected to issue a binding ruling mirroring the Advocate General’s opinion. If it does so, the EU court would be handing the BDS movement a major win against Israeli Jews by codifying blatant discrimination against Israeli Jewish businesses.
Consider how differently the European Union treats Turkish settlements in northern Cyprus. There are currently about 115,000 Turkish settlers and 35,000 Turkish occupation troops in northern Cyprus according to the internationally recognized government of the Republic of Cyprus. Despite Turkey’s invasion and military occupation of northern Cyprus, and the forced dislocation of tens of thousands of Greek Cypriots from their homes as Turkish settlers moved in, the European Union has allocated funds to developing and restructuring the Turkish-occupied northern Cyprus’s infrastructure. Germany, Denmark, and other European Union member countries import Halloumi cheese, a major product from Cyprus that may soon receive a “Protected Designation of Origin” from the European Union covering Cyprus as a whole. There appears to be no initiative to require further labeling of Halloumi cheese produced by Turkish settlers in northern Cyprus as coming from “settlements” or “Turkish colonies.”
On April 1, 1933, a boycott of Jewish-owned businesses broke out across Germany as the SS stood in front of such businesses to inform the public that Jews were the proprietors. The word “Jude” was smeared on store windows and the Star of David image was painted on doors to serve as anti-Jewish labels. Discriminatory laws singling out Jews followed in succession, codifying Nazi anti-Semitism. The infamous Kristallnacht, the “Night of Broken Glass,” occurred on November 9, 1938, followed by the transfer of Jewish-owned businesses to so-called “Aryans.” Germany descended from there to the “Final Solution” of the Holocaust.
Germany officially professes to remember this dark time in its history with deep regret. Last May, Germany’s legislature declared the BDS movement to be “anti-Semitic” in a resolution co-sponsored by German Chancellor Angela Merkel’s Christian-Democratic Union Party, the Social Democrats, the Green Party and the Free Democratic Party. The resolution stated that “all-encompassing calls for boycotts in their radical nature lead to the stigmatization of Israeli citizens and citizens of Jewish faith as a whole. This is unacceptable and worthy of the sharpest condemnation.”  The resolution added, “The BDS movement’s ‘Don’t Buy’ stickers on Israeli products inevitably awake associations with the Nazi slogan ‘Don’t Buy from Jews!’ and similar scrawls on facades and shop windows.”
At the same time, however, anti-Semitism is sadly on the rise in Germany as well as elsewhere in Europe. Reported cases of anti-Semitic crimes in Germany increased by nearly 20 percent last year. Attacks against German Jews have come from both right wing and Islamist extremists living in Germany. The spread of Islamist anti-Semitism in Germany has become an increasing problem in recent years as Muslim immigrants from the terrorist-prone Middle East swarmed into Germany. As the Jewish Telegraphic Agency reported, for example, the annual al-Quds Day march in Berlin has become an occasion for participants to invoke anti-Semitic stereotypes linked to their gripes against the Jewish state of Israel and to call for the killing of Israelis. Last June, a witness testified during a murder trial that a Palestinian accused of killing a German man said he had done so because he thought his victim was a “rich Jew” whose people “destroyed my homeland.”
If the European Union Court of Justice follows its Advocate General’s recommendation, as expected, it will be seen as legitimizing anti-Semitism in Europe. The court will provide one more instrument of lawfare as a weapon of war for the Palestinians and their allies to use against Israeli Jews.
the article was published on Frontpage Mag
Read More 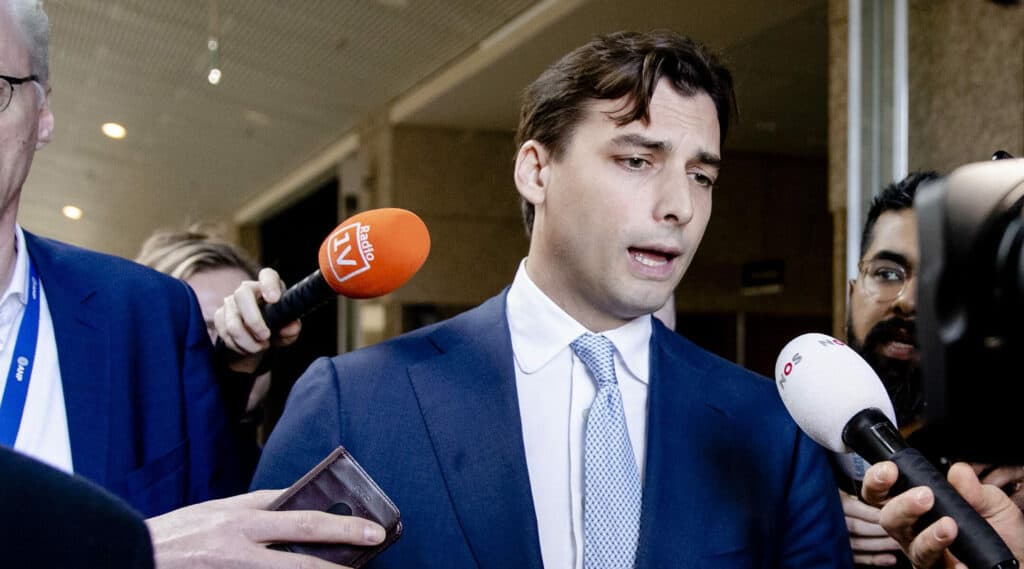 The leader of the Dutch right-wing Forum for Democracy party resigned Monday following reports that members of its youth movement had engaged in anti-Semitic behavior.
Thierry Baudet, a colorful politician who in 2018 published a nude self-portrait on Instagram, said that assuming responsibility for the anti-Semitism scandal was not the immediate reason for stepping down. Rather the trigger was demands within the party that the guilty members be kicked out before the completion of an internal disciplinary review of their actions.
The review is of members of the party’s section for young members who in a WhatsApp group shared Nazi songs. One of them called “Der Untermensch,” or “Subhuman,” a 1942 Nazi propaganda book inciting hatred of Jews and Slavs, a “masterpiece,” the Het Parool newspaper reported last week.
Some party members seek to “skip the process and throw people under the bus before we know what’s happened,” Baudet said in video he shared on social media announcing his resignation as party leader. He warned against a “trial by the media, which isn’t trustworthy.”
If the accused engaged in anti-Semitism,  he said, “they should leave the party, and my resignation will be an act of assuming responsibility for what happened.”
Forum for Democracy seeks a Dutch exit from the European Union and stricter immigration policies. It’s also consistently pro-Israel.
It won only two seats out of 150 in parliament in the 2017 elections but three of the 26 in the 2019 Dutch elections for the European Parliament.
Read More 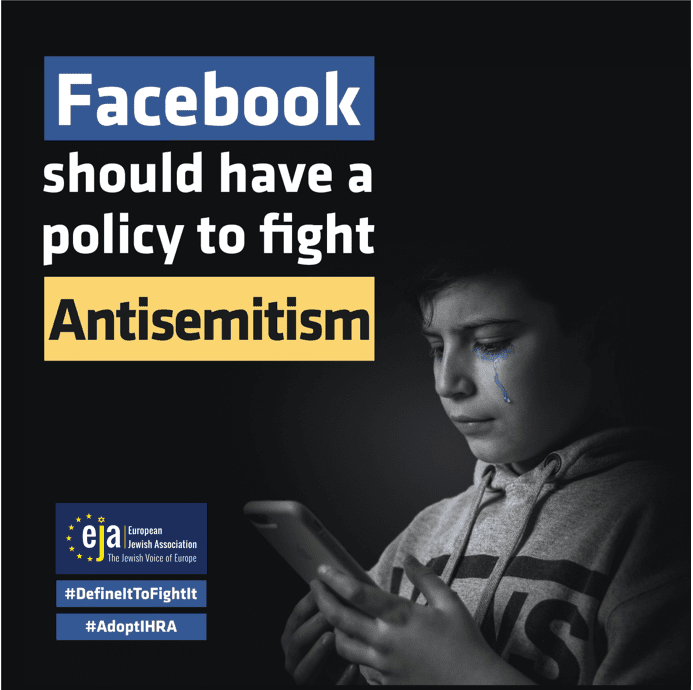 Facebook should have a clear policy to fight antisemitism!
We at EJA are calling Facebook to adopt the IHRA definition for antisemitism!
Define it to fight it!!!
join us and many other organizations around the world in our call for Facebook- lets make a change.