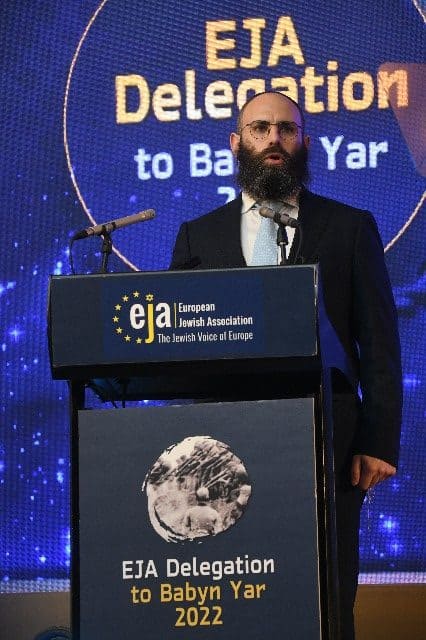 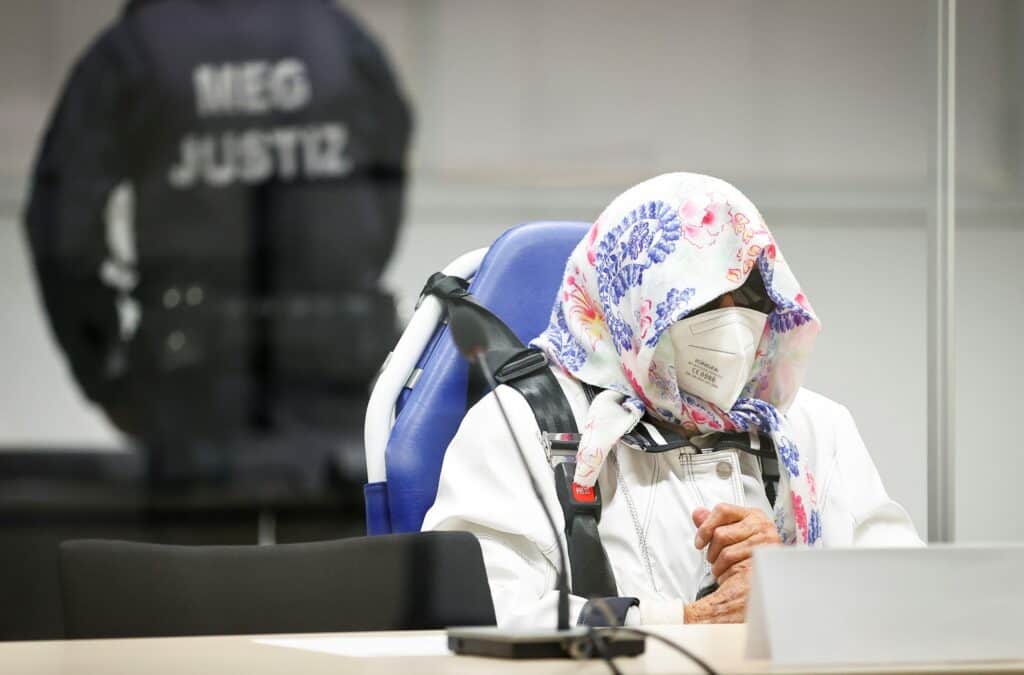 German Nazi war crimes suspect, 96, who went on the run goes on trial

Every Day during the Corona crisis our Advisory Board Member Chief Rabbi Jacobs (NL) writes a diary, on request of the Jewish Cultural Quarter in Amsterdam, which is published on the website of the NIW, the only Jewish Dutch Magazine. Rabbi Jacobs is the head of Inter Governmental Relationships at the Rabbinical Centre of Europe. We will be regularly publishing a selection of his informative, sometimes light hearted, but always wise pieces.
Here, the Rabbi offers his unique and refreshing take on the portion. For our Dutch readers you can follow the diary every day at NIW home page: https://niw.nl and then: scroll down.
Caught with a cap!
It's hard to find the right balance between exaggeration and naivety. The happy medium is the right way to walk, that should be clear. But where does that sweet spot lie?
I had not heard from an older intelligent lady, a brave woman, for several weeks. And so I called her up and it turned out that she had been struggling a bit with her health for a while.
Good that I called her, but I do feel guilty that I had only noticed her absence now, after a few weeks. In the meantime, since I called her, she has started reading some of my diaries and sends me the following response:
“Dear Rabbi Jacobs. I read in your diary pieces that you meet many people with personal problems and are very concerned about the rising anti-Semitism. That seems very difficult. I find it terrible to read those experiences. It's too much for me. And after the war I had to hear in technicolour stereo about all the horrors of survivors of the camps. For me, the war started after May ‘45. I'd rather not read all that misery you have to hear and deal with. ”
And so, after this response, I wonder what the happy medium is. I try to warn against  rising anti-Semitism, but I absolutely must. Conversely I do not want to cause more pain to anyone who is already in pain.
I received a lot of WhatsApps to make "the Jewish voice" heard about the riot around Forum for Democracy. But what is "the Jewish voice"? And am I then "the Jewish  voice"? But keep silent? I presented my problem to a good friend of mine, a non-Jewish psychiatrist. When I open my mouth, some of them start to scream or I, for example hurt this brave woman unnecessarily. And when I remain silent, I get complaints that I am not speaking. His response was very clear:
“If you don't open your mouth now, you're no longer a rabbi to me. And if your comments make people sad, help them. That is your primary task as a rabbi. ”
But in addition to concerns about rising anti-Semitism and all the tensions associated with it, Hanukkah is getting very close. Today a phone call from Jerusalem to make a video while lighting the menorah at my house, without guests, with a call to light the menorah outside even if it is not possible outside due to corona, especially to do it indoors.
The call must be in Dutch after lighting the third light. A second phone call, also today, from Brussels to, even after the third light has been lit, a message in English about a non-religious subject, but about Hanukkah.
And the third assignment, a request came from South America to give a speech in Dutch of 25 minutes. That will be asked of another seven Chief Rabbis. Every evening a rabbi from another country will speak and subtitles will be provided. Apart from this I also have three TV recordings about… Chanukah next week! After all those telephone requests for TV, zoom, videos, Whatsapps and YouTube, I wonder if I could become a better director.
But in the meantime I will have to work very hard on the preparations for the coming week. I have already found a volunteer professional to record the videos. But the words are on me. That is a nice bit of creative tension.
Yet all these problems create tension, sadness and disappointment. It got a bit too much for me. And so I skipped schul tonight. My wife and I took the car to the beach.
Of course I didn't wear my hat, but a cap. Just incognito. Get some fresh air. Delicious! We walk on the boulevard for less than twenty minutes, smell the water, feel the wind or suddenly someone behind me shouts: Rabbi Jacobs! Why don't you wear a hat? You always say that we should not give in to anti-Semitism and keep our Jewish clothing like our ancestors in Egypt. You always say you are not willing to exchange your hat for a baseball cap! I didn't know what to answer for a moment, I felt caught with my cap, but the walk was very refreshing…

“The ‘Group of the Elders of Zion’ and Mayer AmschelRothschild, the skilful founder of the famous dynasty that still today controls the International Banking System, led to the creation of a manifesto: ‘The Protocols…’”

Looking at the above quote, you would think that it was written by a Nazi in the 1930’s, right?

Wrong. This was posted this week by Senator Elio Lannutti, of the Italian Five Star Movement on Twitter.

On the 27th January we will have marked International Holocaust day.

Senator Lannutti reminded us why we must continue to mark international holocaust day, and why we can never assume such a horrendous calamity could never be inflicted on us again.

Antisemitism is as stubbornly rooted as ever. Try and rip it up and its seeds will travel somewhere else. From France to Spain, or Belgium to Belorussia, the political winds that carry it can be strong, or a barely perceptible breeze, but still they blow.

Deborah Lipstadt knows this. She describes where we are right now as a “perfect storm”.

Lipstadt is best know for the libel suit filed against her, by the Holocaust denier David Irving. In her latest book “Antisemitism: Here and Now,” she examines the recent rise in anti-Semitism in the U.S., the U.K., and Europe.

In an interview with the New Yorker this week, she summed the situation up as follows:

“On some level, it is the same old, same old. The construct is the same, the stereotypes are the same. But I think what is different today is that we’re seeing a perfect storm, in that usually it comes from either the right or the left politically. Today we’re seeing it from the political right and the political left, and we are seeing it particularly—not only, but particularly—in Europe from Islamist extremists, or jihadists, or whatever term you’d like to use.”

Why is anti-Semitism still with us? I believe that it is so deeply embedded, that it operates almost at a subconscious level in most people. After all, when things go bad, economically, politically or otherwise, we are to blame. But if any other random group had these accusations laid at their door, such as pizza delivery people or cyclists, everyone would say it was nuts.

Yes, it can sometimes feel like a heavy burden, but Ann Frank, displaying a wisdom far beyond her tender years,summed it up neatly:

“Who has made us Jews different from all other people? Who has allowed us to suffer so terribly up till now? It is G-d that has made us as we are, but it will be G-d, too, who will raise us up again. If we bear all this suffering and if there are still Jews left, when it is over, then Jews, instead of being doomed, will be held up as an example. Who knows, it might even be our religion from which the world and all peoples learn good, and for that reason and that reason alone do we have to suffer now. We can never become just Netherlanders, or just English, or representatives of any country for that matter; we will always remain Jews, but we want to, too.”

I want you to take this message to heart.

Empires come and go, War turns to Peace, and back again, yet still we are here, giving the world the shared totality of our many talents, expertise and wisdom. Not for ourselves but for everyone.

We want to remain Jews. Because we are. Because we can be no other. Because not being so is like asking us not to breathe. Yes, we are leaders in science, the arts, and yes, Senator, in Banking too.

It is not arrogance or self-serving interest that drives us on, as the antisemites would have it.

In fact, it is the exact opposite. Our task was and remains to this day, the same task that each of us were given at Sinai by the Almighty: To make the world a better place. This responsibility rests on every Jew, from Rothschild the banker to Rosenbaum the street cleaner. It is not for our benefit that we do our best, but to honour the task that G-d gave us, for the benefit of all humanity.

We must never lose sight of this. And we must never relent in our task. I will leave the last word to Winston Churchill.  Let it be your call to action, and a reminder to us all on dark days such as Holocaust Memorial Day:

“Some people like the Jews, and some do not. But no thoughtful man can deny the fact that they are, beyond any question, the most formidable and most remarkable race which has appeared in the world.”

May G-d continue to bless us all.