Home > EJA in the media > Israel skips Poland antisemitism meet, but some still see thaw in ties ahead

Israel skips Poland antisemitism meet, but some still see thaw in ties ahead

KRAKOW, Poland — A Polish opposition politician expressed regret at the passage of a law this summer that limited Holocaust restitution efforts, and said he hopes ties between Poland and Israel — put in deep freeze by the legislation — will be repaired soon.

“I personally, from the very beginning, was opposed to both legislations that made so much damage to Polish-Israeli relations,” Michał Kaminski, a Polish senator and a deputy marshal of the Senate with the opposition Union of European Democrats, told The Times of Israel during an interview earlier this week. “Those legislations I opposed in both chambers, they are very unfortunate.”

Kaminski was referring to not just the legislation from July regarding Holocaust restitution, but also a 2018 law that criminalized statements implying the Polish nation played a role in victimizing Jews in the Holocaust. The law was later amended to remove the possibility of criminal charges, but the legislation caused major diplomatic tension between Warsaw and both Israel and the United States.

Three years later, a law that effectively prevents future restitution to the heirs of property seized by the Nazis during the Holocaust led to a downturn in ties between Israel and Poland that has remained in effect since the summer. Each nation recalled its ambassadors, and Foreign Minister Yair Lapid called the law “antisemitic and immoral.”

Get The Times of Israel’s Daily Editionby email and never miss our top stories
By signing up, you agree to the terms

Kaminski — a former minister and former member of the European Parliament — suggested that ties between Israel and Poland would not be irreparably harmed, and claimed that support for Israel was a bipartisan issue in Warsaw.

Kaminski noted that Poland was still among the strongest supporters of Israel within the European Union, and suggested that the rift was motivated by domestic political needs on both sides, which he called “very unfortunate.”

“Poland is still a country in which the attitude toward the State of Israel is absolutely indisputable,” he told the Times of Israel on the sidelines of a conference on antisemitism held in Krakow by the European Jewish Association.

Three months after the freeze in ties between Jerusalem and Warsaw, there were few signs of thaw at the confab in Poland, yet cautious optimism that it was on the horizon.

A spokesman for Israel’s Foreign Ministry told The Times of Israel that any improvement in ties “is basically up to Poland,” adding: “The crisis is because of the law. In order to fix the problem, they should address it.”

While politicians, ministers and parliamentarians from a wide range of countries attended the conference, including the UK, Germany, France, Hungary, Slovenia, the Netherlands and even the Congo, not a single representative of Israel’s government or parliament was present. The only Israeli on the conference agenda was Rabbi Yisrael Meir Lau, the former chief rabbi and current chairman of Yad Vashem.

Prime Minister Naftali Bennett sent a video message that was played at the conference’s gala dinner, where he stressed that “Jews should not be fighting antisemitism alone,” and declared that anti-Zionism is the “modern manifestation” of antisemitism.

A representative for Poland’s government — Wojciech Kolarski, secretary of state in the chancellery of the president — was originally slated to attend the conference but canceled for unspecified reasons. His office did not respond to a request for comment.

Instead, an adviser to President Andrzej Duda read a letter from the president at the conference, which emphasized the need to remember “all Poles” alongside Jewish victims of the Holocaust, and stressed that “contemporary Poland is a safe and friendly country” to Jews.

EJA officials said they invited Israeli Culture Minister Chili Tropper to attend, but he declined. Tropper’s office said he was unable to attend due to scheduling conflicts.

Conference organizers suggested that Israeli government representatives were unwilling to commit to attending the conference due to the uncertainty over the timing of critical budget votes, which wrapped up late last week.

Alex Benjamin, the director of the EJA, told The Times of Israel that the crisis in ties between Israel and Poland likely “would have been [part of the] equation” for Israeli officials choosing not to attend.

Kaminski spoke to The Times of Israel immediately after he addressed a gala dinner at the EJA gathering in Krakow on Monday. Feted as a close friend of Israel and of Europe’s Jewish community, Kaminski’s public remarks echoed Bennett’s equation of antisemitism and anti-Zionism: “Fighting antisemitism and standing with Israel and with its people — we are fighting the same fight.”

The Polish senator told The Times of Israel that while he understands Jewish and Israeli outrage over the restitution legislation, he does not believe it was aimed specifically at cases of Holocaust survivors and victims. 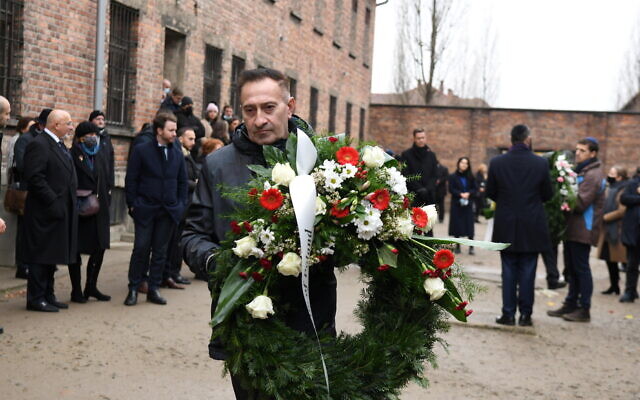 Artur Hofman, the head of the Polish Jewish cultural organization TSKZ, lays a wreath at Auschwitz on November 9, 2021. (Yossi Zeliger/EJA)

Warsaw says the law will bolster legal certainty in the property market, but opponents say that it is unjust to those with legitimate claims, including Holocaust survivors and their families.

The legislation places a 10-to-30-year cutoff date on contesting past administrative decisions on restituting property lost during World War II. Critics of the law argue that it will effectively cut off the ability of Jews to reclaim property that was seized before and during the Holocaust.

Poland is the only country in the European Union that has not passed comprehensive national legislation to return, or provide compensation for, private property confiscated by the Nazis or nationalized by the communist regime.

Artur Hofman, president of the cultural group TSKZ, the largest Polish Jewish organization, told The Times of Israel that while the law is problematic, the outrage ignores more local issues.

“I know that everybody in the world, in Israel, in the USA, is asking about money from property in Poland,” Hofman said. “But Polish Jews are like toys in this game. Nobody asks us.”

Hofman said that cultural buildings that once belonged to the Jewish community in Warsaw were seized by the government and never returned.

He claimed that restitution funds sought by organizations in the US and Israel are rarely distributed to Holocaust survivors, and that the money should instead remain in the Polish Jewish community and go toward remembrance and education projects.

We use cookies on our website to give you the most relevant experience by remembering your preferences and repeat visits. By clicking “Accept”, you consent to the use of ALL the cookies.
Cookie settingsACCEPT
Manage consent

This website uses cookies to improve your experience while you navigate through the website. Out of these, the cookies that are categorized as necessary are stored on your browser as they are essential for the working of basic functionalities of the website. We also use third-party cookies that help us analyze and understand how you use this website. These cookies will be stored in your browser only with your consent. You also have the option to opt-out of these cookies. But opting out of some of these cookies may affect your browsing experience.
Necessary Always Enabled

Performance cookies are used to understand and analyze the key performance indexes of the website which helps in delivering a better user experience for the visitors.

Analytical cookies are used to understand how visitors interact with the website. These cookies help provide information on metrics the number of visitors, bounce rate, traffic source, etc.

Advertisement cookies are used to provide visitors with relevant ads and marketing campaigns. These cookies track visitors across websites and collect information to provide customized ads.

Other uncategorized cookies are those that are being analyzed and have not been classified into a category as yet.